PURPOSE:     This letter describes the purpose, procedures, and documents needed to implement this Fourth Degree Initiative in the District of Maine.

BACKGROUND:      As you travel around the State of Maine, or in your local communities, how many times have you observed an American Flag that has long-ago past its prime, as far as serviceability? It may be faded, torn, or have broken fasteners. Have you asked yourself, “What can I do to replace this flag?”

The legal basis for replacing an unserviceable flag is found at Title 4 U.S.C. § 8 (k), within the Flag Code. It states: “The flag, when it is in such condition that it is no longer a fitting emblem for display, should be destroyed in a dignified way, preferably by burning.”

A home or business owner may display the flag for many reasons: patriotism, sentimentality, honoring a deceased relative, national pride, etc. While they may proudly display the flag, many are unaware that there are restrictions as to its display. It is an unwritten rule that we, as members of the “Patriotic Degree,” assume upon our exemplification, to “educate those who are violating these rules.” HOW we educate them requires discretion, tact, and courtesy. It also requires the resources to implement the replacement.

RESOURCES:            Each Assembly should acquire a supply of flags to replace those which, in the members’ travels, are identified as unserviceable. These flags may be purchased by or donated to the Assembly.

PROCEDURES:        After observing a flag which appears to be unserviceable, the member approaches the owner, and through conversation, offers to replace the flag for free. If it is agreed upon, the member then also offers to dispose of the “worn” flag in an appropriate, dignified, respectful manner. The Assembly then supplies an appropriate-sized flag, and arranges to exchange the old for the new, with appropriate dignity and ceremony. This allows for a “teaching moment“ by educating the owner in proper flag etiquette, display, and care for the flag.

DOCUMENTATION:          When a flag is replaced, submit a report to the District Master, containing the following:

Upon receipt of the above documentation, the District Master will send a certificate (Attachment 2) to the Assembly, attesting to the replacement of the worn-out flag. This Certificate, along with the Certificate of the Architect of the Capitol (if the flag was flown over the United States Capitol) may then be presented to the flag’s owner, along with photos of the Retirement/Replacement Ceremony, if any were taken.

(Note: The text of this Reference, specifically Title 36 United States Code § 301 National Anthem (b) (1) (B), was amended to allow United States Veterans, in civilian attire, to render the hand salute, whether under cover or not.)

§9. Conduct during hoisting, lowering or passing of flag

During the ceremony of hoisting or lowering the flag or when the flag is passing in a parade or in review, all persons present in uniform should render the military salute. Members of the Armed Forces and veterans who are present but not in uniform may render the military salute. All other persons present should face the flag and stand at attention with their right hand over the heart, or if applicable, remove their headdress with their right hand and hold it at the left shoulder, the hand being over the heart. Citizens of other countries present should stand at attention. All such conduct toward the flag in a moving column should be rendered at the moment the flag passes.

There are several procedures available to every Council/Assembly:

Most American Legion Posts conduct a “Flag Burning Ceremony” proximal to Flag Day, June 14th;
Many Cub Scout Packs/Boy Scout Troops do the same; this is often an Eagle Scout project;
The Council/Assembly might want to conduct this Ceremony on their own.

Title 4 U.S.C. – The Flag Code, does not specify any particular format, only that it be conducted in “a dignified and respectful manner.”

One other manner of disposal is to take the Union of an embroidered flag, cut the stars from the field. Dispose of the Field of the Flag as above. Print a note to be attached to the star, and place it in a small ‘Zip-Loc’ bag. These may even include the Council or Assembly which provides the “Wallet Stars” These items can then be handed out at Exemplifications, Parades, Memorial Day Masses, Veterans Homes/Hospitals, etc 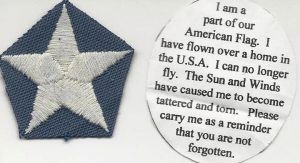