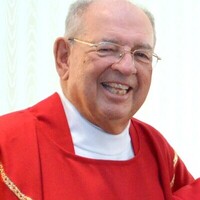 His life’s work was to help people grow closer to God, and now his labors have ended and has found his reward with his Father in Heaven.

Reverend Renald D. Labarre was born on July 6, 1934, on Pierson’s Lane in Biddeford. His father, Edmond Labarre, was from Thetford Mines, Quebec, and worked at Saco-Lowell Mills; his mother, Aurore Binette-Roy, was from Biddeford and was a homemaker who hosted numerous families coming from Canada to work in the mills.

At a young age, Ron’s family knew there was something special about him.

In childhood, he almost met an untimely death as the result of an unfortunate accident with scalding hot water. His parents, not knowing what to do, called upon Fr. Zénon Decary, who immediately visited to give him the Sacrament of the Last Rites. After spending some time with young Ron, Fr. Zénon told Aurore he would be ok because “God has a plan for him”. His mother and father didn’t tell Ron what Fr. Zénon said until he was ordained because they knew whatever the plan was, God would guide him. Ron believed throughout his life Fr. Zénon saved his life. Fr. Zénon’s legacy is documented and preserved as a potential cause for beatification because he was responsible for hundreds of cures and other events which defy explanation. A statue of him was erected at St. Joseph’s Church under Fr. Ron’s leadership, where it still stands today.

As a young man, Ron set out on a course to be a Doctor of Psychology. After graduating from the University of Montreal with a Master’s in Theology and Philosophy, he followed God’s call and entered the seminary. Ordained in 1960, he became a well-known and respected priest who carried God’s message wherever he was called to do so. He served in Madawaska (St. Thomas), Caribou (Holy Rosary), Millinocket (St. Martin of Tours), Brewer (St. Theresa), Lewiston (St. Mary), Auburn (St. Philip) and ultimately his hometown of Biddeford (St. Joseph). Not being one to sit still, he was blessed to serve as the pastor of religious education for the Roman Catholic Diocese of Portland and the Catholic Youth Organization, as it was known at the time. In 1993, at the request of Most Reverend Joseph Gerry, then Bishop of Portland, he returned home to Biddeford to become the Pastor of St. Joseph’s Church. The bishop believed Fr. Ron had just the skills needed to bring the Church back to its former glory. He raised money and developed plans to renovate the church and the rectory. His heart and soul reside wherever you look in St. Joseph’s Church. Fr. Ron was also very proud of the Christmas Open House held at the rectory for many years. He served as Pastor until his retirement in 2007 at the age of 73. Shortly thereafter he agreed to serve in Houlton (St. Mary) and Island Falls (St. Agnes) for a few months when the priest there fell sick.

He was Chaplain for the Knights of Columbus, the Edmund Labarre 4th Degree Knights in Biddeford, named after his father. In March 2014, he was inducted into the Franco-American Hall of Fame. He was also inducted into the Order of the Holy Sepulcher of Jerusalem.

Everyone knew it was going to be hard for Ron to retire. Fr. Ron loved people – wherever he was needed is where he wanted to be. Whether presiding over a wedding, funeral, Sacrament of the Sick, celebrating the French Mass on Sunday mornings or meeting with people to evangelize to youth at the local Dunkin Donuts, you could always hear his giant voice, get a big hug, and see the smile that lit up everyone around him. One of his favorite pastimes was leading religious pilgrimages throughout the world with friends and parishioners. Another great joy was celebrating Mass at St. Brendan’s in Biddeford Pool during the summers before he ultimately decided to move permanently to Ft. Meyer’s, FL with his best friend, Reverend Jerry Levesque.

He is predeceased by his parents, a sister Gloriette DesRoberts, a brother-in-law Edward Maxson and a nephew John Maxson.  He leaves behind a sister, Reinette Maxson of Biddeford, brother-in-law Richard DesRoberts of Saco, niece Michelle DiSotto and her children Jack and Gianna of Scarborough, a nephew Kevin DesRoberts and his wife Amy, and children Lilly, Lindsay and Lucy of Saco, niece-in-law Marie Wagner of Gray, and many friends too numerous to count.

The reception of the Body with vigil prayers will be held on Thursday, August 19th at 3:00PM at St. Joseph’s Church with visiting hours to follow until 7:00PM. More visitation will be held from 9:30AM-10:30AM with a Mass of Christian Burial to follow 11:00AM on Friday, August 20th at St. Joseph’s Church, of Good Shepherd Parish, in Biddeford. Father Labarre will be buried with his parents in St. Joseph’s Cemetery in Biddeford. To view Father Labarre’s memorial page or leave an online condolence, please visit www.cotefuneralhome.com

Posted in Uncategorized | No Comments